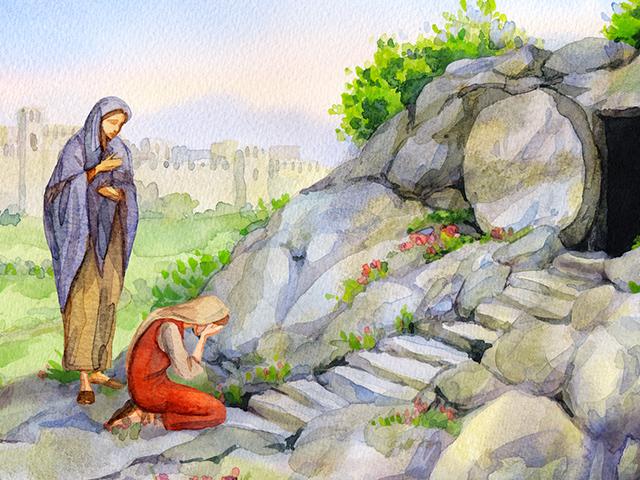 Today we celebrate the feast-day of one of the greatest women in the whole of the Bible. Clearly, Mary, Mother of God, has pride of place because she is our mother in faith. Mary Magdalene, however, can be seen as our sister in faith.

Of course, Mary Magdalene is often identified as being a woman of ill-repute, a prostitute no less, but there is no record of this in the Scriptures. We are simply told that seven demons were cast out of her (Luke 8:2; Mark 16:9). Quite why the reputation of this magnificent woman and example of the Christian life should have been imputed with this slur is hard to figure out. Was it hearsay? What we do know for sure is that the Lord delivered her from whatever bound her. Some suggest that it could have been a complex illness of some kind or maybe even some mental suffering or anguish. From  that time on she dedicated her life to following Christ.

The Evangelists are especially sensitive to Mary’s closeness to the Lord during his last days on earth. She remained with him at the foot of the cross, staying when all the disciples except John had fled.

She was at his burial and, most striking and significant of all, she was a witness of the Risen Lord. God confounded the wisdom of an age in which women were regarded as second-class citizens and were not considered to be reliable witnesses in court. Ancient societies were misogynist and patriarchal, but God showed that this way of thinking to be a nonsense in the kingdom of God. Consider that God chose Mary to be the first person to witness the greatest event in human history — the resurrection — before Peter and the other disciples. We venerate her for this.

Mary can be seen to represent all women since the beginning of time who have witnessed Christ’s resurrection in their lives. In a way, in the kingdom of God, whether we are male or female is not an issue: we are equal before God, but we have different roles, different charisms and different strengths. Mary’s role was to support the Lord — it was a role of love and service, and this is the legacy she has left us. Today we cherish her memory, celebrate her life and strive to emulate her courageous witness.

Lord God, help as to follow the example of Mary Magdalene and live a life of humble service, sincere repentance and courageous witness for Christ.